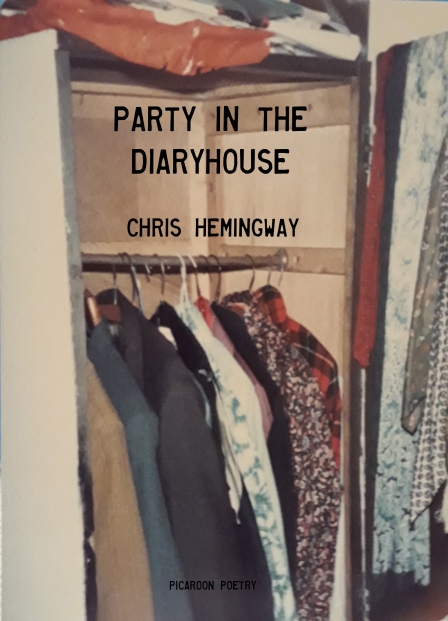 Chris Hemingway is a poet and songwriter from Gloucestershire. His previous books include Cigarettes and Daffodils, and The Future. Chris helps with the organisation of the Cheltenham Poetry Festival and the Gloucestershire Writers’ Network. He was once described in Bristol’s Venue magazine as “suffering from hip Sunday school teacher with guitar syndrome”, but that was probably just because of the spectacles…

Peering through sash windows
down to St Pauls Road.
Hoping fried eggs and black coffee
can rescue my throat,
and my cognition.
Remnants of a night that ended
too late in the morning.

Zoe suggests Monopoly
and no-one seems to mind.
So we gather, propping chins on our hands
and drift around the board.

Giving away money
without really knowing why.
Arranging the green and red blocks
into esoteric motifs.
Imagining tiny TVs
flying through the hotel windows.

Chris Hemingway’s poems are kind, rueful and shyly wise. They think. They tell stories. With lines which fall lightly into rhymes and chords, they reach for your heart. They sing.

Chris Hemingway’s Party in the Diaryhouse reminds me of that second-hand record store I used to buy Lou Reed LPs in when I was 17, or that band I was in for two days that only got to rehearse once. These are poems for the rock stars we never were. They are full of melancholy, regret and acceptance – all delivered down the barrel of a finely tuned vinyl collection.

Chris Hemingway is a novelist who displays a gift for narrative and characterisation in his poetry.  In carefully crafted and moving poems Hemingway explores the tensions of modern lives which tick and click ‘Like a drum machine about to break’ or looks ‘blurred through the dust’ to the decade of David Lynch and Synthpop. Poignant, yet humorous, nuanced yet potent, these poems go down as easily, and almost as quickly, as an espresso, offering the same enervating kick at last gulp.

Party in the Diaryhouse is currently available to order from the Lulu website or directly from Picaroon Poetry – it is £7 including UK postage, £10 for international orders. Email picaroonpoetry@gmail.com for details / to place an order.