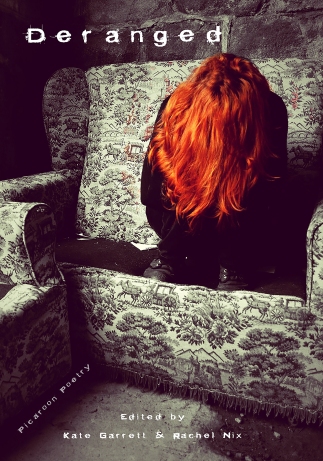 Deranged was originally a response to the claim by one critic that women writers calling out sexism were ‘deranged poetesses’. It grew into something much more than that.

“Deranged is what these women are not…they have taken all of the loaded expectations of what it is to be called a woman, of how to behave, what to wear, to be pretty, to be quiet and they have rejected all of this. This rejection has not been without pain but the pain is part of the art. They do not ‘bite their lip’, they are not going to be silent, be good, they will become the ‘crazy bitch’, ‘pressing down on every bullshit line every man had ever given…’

And yes, “They” have often been men. But it’s ALWAYS been hate.’

The line through the women artists of the past straight to these angry powerful women is a direct one; these poems speak of Christina Rossetti, Virginia Woolf, Plath, Sexton and many others.

Available from Lulu, and coming soon to Amazon.